META NEBULAS, what is it ?

META NEBULAS, what is it ? It is Social Mining, DeFi and NFT combined in a single platform. Discover now its characteristics.

META NEBULAS is a platform formed by some components such as Social Mining, DeFi and NFT, we named it, the SocialFi NFT platform.

In this ecosystem, there are humans and they make sure that we melt into other planets as space cryptopunks to discover more. The goal is to explore the universe beyond the Milky Way, to discover the creatures of other unknown planets and to reveal the beautiful abstract space to humans.

That’s why the founding team of this ecosystem has brought together Social Mining, DeFi and NFT into one platform.

There is life in every corner of the universe, we are NOT alone.
Explore the universe with META NEBULAS!

If you’re a fan of things intergalactic, here’s your chance to get collectible NFTs and learn more about the universe. We have a series of collectible NFTs, all in the Binance channel. 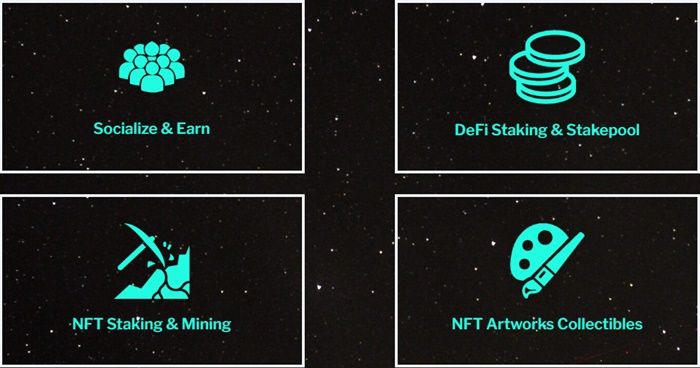 In the era of rapid technological development in the 21st century, the reproduction of the human race has reached 12 billion people. The development of human civilization and technology is advancing at a cross-age speed, but it ignores the ecological order of the mother of the earth that gave birth to mankind. So that alien civilization can take advantage of it and spread it with biological and chemical weapons.

At present, the virus released by the alien civilization has spread rapidly among the human races, continuously depriving humans of their lives.

Mankind was forced to abandon this 4.5-billion-year-old earth and move to other planets in the galaxy.

MetaNebulas is the most advanced aerospace technology company in mankind. Under this imminent emergency situation, provide human beings with a plan to move to outer space to continue the human race. Humans only need to exchange MetaNebulas Universal Currency (iONZ) to purchase tickets to board the Noah’s Ark space capsule (NFT) and complete human rescue missions to obtain and accumulate experience points (Solarix) to travel with MetaNebulas to other planets in the galaxy to survive.

Neutra Finance, introduction to its ecosystem