Decentralized Exchanges, the top 7, 2021 ranking. What are the 7 most used and most efficient decentralized exchange platforms.

Decentralized exchanges platorms, they are essential if you have cryptocurrencies and wish to buy and sell them in a decentralized way, do you know the best in 2021? 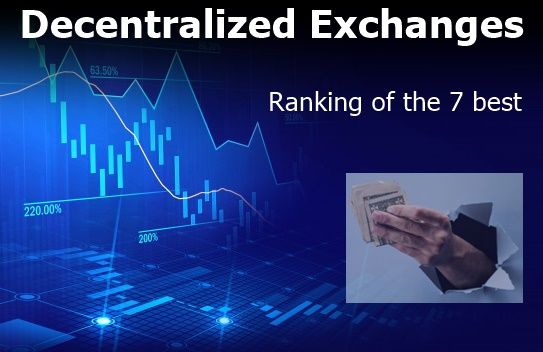 Decentralized exchances, here is the ranking of the 7 best:

Uniswap has been around since 2018 and this platform has created a real revolution in the world of DeFi.

The fact that you could trade Ethereum-based ERC20 tokens on the Ethereum blockchain without an order book was an achievement.

Uniswap has used smart contracts that allow users to trade with each other without intermediaries, making them decentralized and peer-to-peer.

Uniswap used innovative liquidity pools to generate the assets needed to complete the swaps. Users, like you, can add pairs like ETH / DAI coins, for example, in order to add to the pool. In return, users receive a small percentage when the assets in that pool are used. The price is determined by the portion of the asset that remains in the liquidity pool.

One of the major strengths of the platform is the Uniswap interface. You can quickly link Uniswap to your MetaMask and start trading tokens. It’s simple, efficient, and, perhaps more importantly for some crypto enthusiasts, decentralized. Uniswap is still, after all this time, at the forefront of decentralized finance.

The overarching goal of Uniswap is to empower users like you to manage the governance of the exchange. This means that users will help the future of the exchange by voting if they wagered any of the Uniswap tokens. When it comes to decentralized exchanges, you can’t go wrong with the DEX bringing decentralized exchanges to the fore. Since then, many exchanges have directly copied Uniswap’s model due to its success and open source code.

Uniswap V3 was also recently launched, improving the capital efficiency, runtime and infrastructure of Uniswap. The Uniswap protocol keeps evolving, so although other protocols with a similar interface have come to challenge Uniswap, the Uniswap team has managed to keep their platform up to date for users.

Although gas fees on the Ethereum blockchain will lower soon, MDEX has managed to eclipse Uniswap in market cap volume when you take both MDEX and MDEX (BSC) market cap volumes into account. MDEX are not shy to declare themselves already as ‘the largest DeFi ecosystem’. For only being in existence since January 2021, with the MDEX (BSC) only coming out in April 2021, MDEX has already become, arguably the largest decentralized exchange in the world. Both of their blockchains have over $1 billion in market cap.

MDEX could have been first on this list, as its success in such a short amount of time has been immense, but the nod goes to Uniswap for being so influential and still so relevant in the space. It might make users uneasy that MDEX was created by Huobi, a centralized entity, whereas Uniswap was created as a decentralized entity, with no ICO, from the start.

MDEX’s homepage has the feel of a centralized exchange, with charts and numbers thrown at you. This isn’t a bad thing as it does give the user a dynamic engagement. Perhaps if you’re more comfortable with numbers being shown to you right away, instead of the quiet interface of Uniswap, you would find comfort in it. The swap feature is also as intuitive as Uniswap’s, with options like pool, liquidity and trading at the top.

SushiSwap is first on the list of culinary-themed decentralized exchanges. If you’re a fan of sushi over unicorns, this may appeal to your senses more. In any case, SushiSwap has a lot in common with Uniswap since it is a fork of Uniswap.

It didn’t end with just being a cute sushi-themed fork. Controversially, SushiSwap launched a ‘Vampire Attack’ onto Uniswap, draining it of its liquidity by offering those who migrated huge rewards and incentives to switch over. In a matter of two weeks, over USD 1 billion worth of cryptocurrency was siphoned out. In another controversy, the anonymous founder also took out USD 14 million, which he regretted and put back in.

Even with all of this, SushiSwap continues to be one of the top decentralized exchanges. The reward distribution, or the interest that stakeholders make when contributing to the liquidity pool, is adjusted so that those with smaller holdings also get compensated well, not just those with extremely large stakes. There are also fun sushi-themed rewards.

The swap interface looks much more modern than Uniswap’s and it is just as easy to trade on it. Just like a copy of Uniswap V2, you can find all the different options at the top, from pools, to yields, to analytics. If you ignore the controversies and are interested in the staking rewards, then SushiSwap is a great decentralized exchange to use.

Like Uniswap and its food counterpart in SushiSwap, BurgerSwap also provides swapping and a percentage yield from liquidity pools. What differentiates BurgerSwap are the rewards it gives for participating in governance. This means that if you are an active participant in voting where the protocol will head towards in the future, then you’ll be rewarded with BURGERs (not literal burgers) by BurgerSwap. A main selling point is its ‘democratized’ platform. Also, the fact that it’s on the Binance Smart Chain (BSC) and not on the Ethereum blockchain means that BurgerSwap will be having Bitcoin, ETH, BCH and XRP as BEP-20 tokens.

Although not as modern-looking as SushiSwap, Burgerswap is just as pleasant to look at as Uniswap. It naturally comes in dark mode and the options to the left side are clearly shown, from swap, to liquidity, to governance. The socials are also neatly provided. If you’re looking for cryptocurrency options outside of the Ethereum blockchain and an exchange that puts a heavy emphasis on governance, BurgerSwap may be your culinary DEX of choice.

The final culinary swap on this list, PancakeSwap has the most fun vibe out of any exchange on this list. On the home page, you are peppered with options like farming, staking and lottery among the backdrop of sparkles and pancakes.

The design is cute and quirky, with their logo being what seems to be a living pancake with ears. Many of the pages use the pan that flips seven pancakes perfectly onto a plate, perhaps giving you a metaphor for a perfect swap. It definitely makes you feel more at ease with its design.

Though USD 10 million the DEX received from Binance to get started might put decentralization purists on edge, PancakeSwap’s developers are also all anonymous, which might make you wary or give you flashbacks of Satoshi. In any case, it is audited by Certik, so the protocol has been checked out by a third party. PancakeSwap also operates on similar liquidity pool protocols as the other [insert food here]Swap exchanges.

With PancakeSwap V2 having the success that the creators envisioned, PancakeSwap should continue to attract those who are looking for a great exchange under the backdrop.

Like its unicorn cousin and culinary counterparts, JustSwap makes it simple to swap tokens. However, unlike the other applications, JustSwap isn’t as feature-heavy. Since the protocol is new, it doesn’t have the staking or rewards features as some of the other decentralized applications have. JustSwap is still the main exchange you can use your TRC-20 tokens, which for some people is a convenient option. The TRON blockchain, for now, is faster and cheaper than the Ethereum blockchain, making trades a lot more convenient for many.

So if you have a bunch of coins on the TRC-20 network or just want to see what it’s like trading on a platform that isn’t Ethereum-based, JustSwap could have what you’re looking for.

The platform lets you buy bitcoin (BTC), litecoin (LTC), ether (ETH) with all kinds of fiat like Australian Dollar (AUD), United States Dollar (USD), euro (EU) and much more. Bisq doesn’t command the wealth that other decentralized exchanges on here command, but it is on this list for being able to trade Bitcoin and other altcoins with fiat in a private and secure manner that bolsters the values of decentralization.

Although fairly easy to use and the design is very clean, it could be a bit harder to get used to. For one, you have to actually download the program. It doesn’t just show up on your browser with a search. But after that, it isn’t difficult to jump right in. Bisq offers a ton of videos for you to learn in case you’re stuck.

If this were a list on keeping up with decentralization values, privacy and trustworthiness, Bisq would be on top of the list. It’s certainly one to consider if you want to trade Bitcoin while keeping the ethos of decentralization in mind.