Crypto community game, this game is a real revolution, discover why?

Crypto community game, this game is a real revolution, discover why? This application has managed to build a real universe around gaming and a large active community.

Crypto community game, what incredible game application we want to talk about, you certainly know it, it is Axie Infinity.

Among the multitude of these applications, Axie Infinity is one of those projects that started small and managed in a few years to build a real universe around gaming, the collection but also (and especially) its community.

From a simple application inspired by CryptoKitties and Pokémon to the development of Scholarships and the creation of their sidechain, what explains the success of this project today?

Crypto community game, the story of an incredible success:

Before looking in more detail at the “macro” reasons for Axie’s success, it is important to present and understand the different stages already reached by the game that has practically become a metaverse in its own right.

It’s December 2017 and work on the ERC-721 standard is in the testing stage thanks to the collaboration of Dapp Labs, which is experimenting with this new type of smart contract with CryptoKitties.

Meanwhile, somewhere in the Philippines, a team of developers noticed the spectacular craze for CryptoKitties and Decentraland despite the sky-high transaction fees and decided to put on paper an idea that would change their lives (and those of thousands of players): Axie Infinity.

By the time the Whitepaper was written and the legal structure named Sky Mavis was created, the market had collapsed and the general public had lost interest in the crypto universe, which was too volatile for their taste.

But those who had been closely interested in CryptoKitties understood the potential of the ERC-721 standard that was accepted in early 2018: In addition to actually owning an asset and trading it on a secondary market, it was now possible to get it as a reward for efforts and time spent in a project.

2018: a launch in the middle of the bear market

It is by betting on the support of this community that Sky Mavis will launch the pre-sale of “Origin” Axies in February 2018, allowing to raise 900 ETH (about 700,000 dollars). A month later, the smart contract for exchanging Axies on the secondary market is deployed and then in May, the possibility to mate (breed) one’s Axies is born.

At that time, newly created Axies were traded for a few dollars or distributed through giveaways, simply by interacting with statuses on social networks (like Twitter recently…). It is important to know that this giveaway practice was very common for several reasons:

This balance was necessary for everyone: on the one hand users were looking for another way to earn cryptos than trading, on the other hand developers needed passionate users to understand their needs and expectations in order to propose a fun experience most adapted to this new market.

Regarding Axie Infinity, we can say that the first need of the users was fulfilled in May 2018, even if it will be necessary to wait until October for the second one to be satisfied with the possibility of having one’s monsters beat other players.

Even though the battles were automated, they still required strategic choices in the creation of monster teams in order to rise in the rankings of the various seasonal tournaments. Also, it is important to mention that the rewards of these tournaments were the result of partnerships with MakerDAO, Kyber Network and many others, offering different cryptos to the best players. 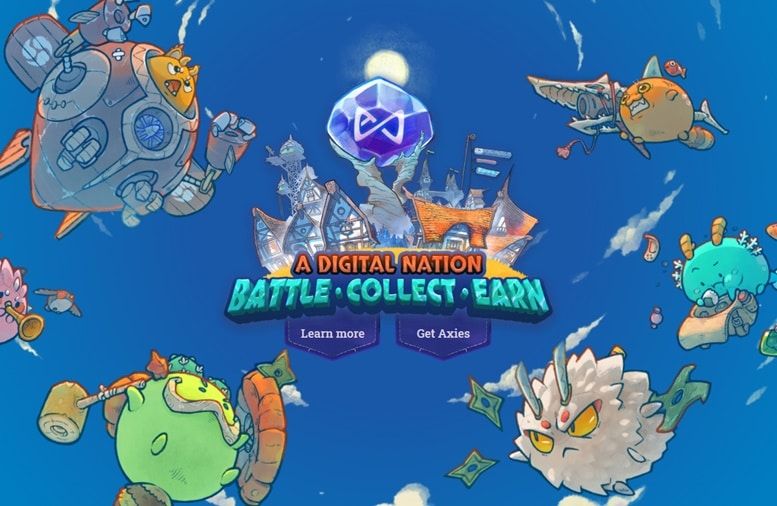 But the Sky Mavis team is quickly seeing bigger things for all these little Axies. They need a world of their own, where they could have incredible adventures. In January 2019, 17,217 plots of land (LAND) are sold for a total of 3,200 ETH (about $416,000), laying the foundation for Axie Infinity’s metaverse: Lunacia.

Anticipating the scalability of the project, the year 2019 will be marked by the migration of assets concerning the Lunacia universe (customization objects and terrain) on the second layer of the Loom Network. The Axies will remain on the first layer of Ethereum.

The tournaments and partnerships follow one another, the community grows while consolidating day by day and the Axies are always exchanged for a few handfuls of dollars. The novelty in the game will arrive at the end of the year with an access to the alpha of the gameplay evolution: the automated fights will give way to a choice of skills to use during the fights.

The year 2020 will mark a turning point for humanity with its successive confinements, the accelerated adoption of digital technology, but above all a virtual halt to the traditional global economy. The NFTs and crypto economy, on the other hand, will end up running at full speed.

From the beginning of the year, Sky Mavis will release the Mavis Hub, a platform dedicated to hosting future applications (Marketplace, Lunacia and PvP / PvE games) of the Axie Infinity universe. The objective of the Mavis Hub is to ensure the portability of the game on all types of media: access to the game is now possible only by downloading an application on mobile (IOS and Android) or computers (Windows and Mac).

In March, a national lockdown was declared in the Philippines, slowing Axie’s development slightly. Slightly, because in May a new milestone is reached for Lunacia: all 73,360 remaining LANDs on the map will bring in more than 4,600 ETH (about $920,000) during this sale.

Then, everything will follow for Sky Mavis. In June, they joined Ubisoft’s incubator program, Entrepreneur Labs, and in July, the Ronin testnet was launched. Like all dApps on Ethereum, Axie Infinity was hit hard by the transaction fees due to the raging DeFi Summer. But it was also a time to think of decentralized finance use cases tailored to their game, including Smooth Love Potion (SLP) and a governance token, the Axie Infinity Shard (AXS).

At that time, when Binance announced that it had listed the SLP token, the most important thing was not the spike to $0.20 and then back down to $0.02, but rather the entry of a utility token related to an NFT project on one of the biggest exchanges in the crypto sector. The consequences of this entry on the platform would not only mark a turning point for Sky Mavis, but also change the lives of thousands of people around the world.

When gambling is a way to make a living

The change was the change in a dream that anyone who has played a video game has had: the dream of being able to make a living playing video games. Until now, this dream could only be realized by an elite few in the various E-sport tournaments around the world, but Axie was about to change that with her little monsters and love potions.

It may be hard to see the benefit of earning a few dollars a day, but in many countries around the world it is enough to feed yourself and your family. And while the second wave of COVID is looming, starting in September 2020, the bull run will accompany a key indicator to know the health of a project: Axie Infinity will experience a peak of 3,544 weekly active wallet!

It becomes difficult to find an Axie under 40 dollars, the SLP stagnates around 0.01 dollars. It should be noted that to play Axie Infinity, you need to have three Axies in your team. With the price of Axies rising to the bottom, this made an entry ticket to the game worth $120 USD but also turned some players who had hundreds of them into Whales.

The reason for this success is not only due to the bull run crypto but also to a community organization: the Scholarships. Taking advantage of the possibility of logging in with a username and password, these new Whales started lending their accounts so that other people could play the game… and win love potions.

What future for this Crypto community game?

Today, Axie Infinity continues to blow up the counters. Their latest update on the increased mating fee (150 SLP minimum and 4 AXS) can easily explain this interest that had already occurred when AXS was added to the breeding process. The reason why the floor price for an Axie is around $200 is because it now costs $80 in AXS and $45 in SLP to get one.

While Axie Infinity is not the only NFT game that uses the “Play To Earn” method, it is nonetheless the first to be so successful and, more importantly, so visible in the real world. Its business model, while young, will likely be disrupted again when their metaverse is released, but one thing is certain: the community will respond to shape what could become their paycheck for years to come.

From simple little monsters practically given to survivors of the 2018 bear market, Axies are becoming a symbol of economic alternatives in countries where the U.S. dollar has strong purchasing power. Perhaps in the future the dollar will be worthless, but the effort, participation and time spent in the game and community will always have real value.