CBDC, the end of your freedoms? 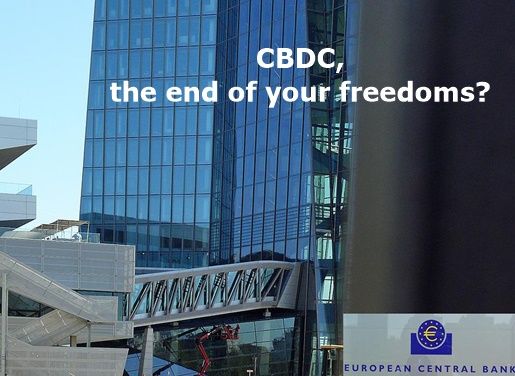 CBDC, let’s take stock of the situation. More and more countries are developing them or have already implemented them. It is therefore important to understand what these digital currencies are and what they are not.

Cryptocurrencies are based on decentralization and a certain form of confidentiality, even anonymity, which is the opposite of the CBDCs philosophy, indeed, they use the blockchain, but with the aim of total centralization in order to have total control.

What does this mean?

Concretely, it can mean that if a state has its own CBDCs, it will be able on a simple decision of its part to have a complete control on your finances.

Therefore, we can say:

These are not cryptocurrencies like Bitcoin, Ethereum or Cardano, but simple dematerializations of currencies currently controlled by governments.

CBDC, some examples are better than many theories:

With CBDCs, governments, companies, for example, could program their digital currencies only for making certain purchases, at certain times, etc. For example, you could be given a sum of money that would be valid for 30 days, so it would be limited in time, it could be valid only for certain types of purchases. Almost anything is possible since these currencies would be fully programmable.

Another disadvantage is that employers could easily restrict the use of it towards an employee who does not perform his job properly. The risk is still to use cryptocurrencies only for the uses authorized by the governments.

Now you understand better the nightmare that can await you. It’s not a matter of being afraid, but just realizing that no government on earth has ever had such power, no company either. This opens up incredible possibilities of control without forgetting that your fortune will only be numbers, a counter, which can be controlled at a distance…

So don’t confuse CBDCs with cryptocurrencies.

The main purpose of creating crypto-currencies was to remove people from the excessive control of their governments and states through fiat currencies.

In this scenario, the creation of state-owned digital currencies would be a step backwards for the cryptocurrency industry.

Central banks will have, the power to create money in circulation, in the same way as the current system. Commercial banks lose the power to create money through the issuance of credits and other financial services, now reserved to the central bank. All the accounts that record transactions relating to assets, liabilities, income and expenditures by individuals, companies and households will be held directly by the central bank.

In such an operation, all financial power is delegated to the central banks and thus to governments. This would be referred to as a centralized ledger. Whereas cryptocurrencies use a decentralized ledger that gives users control over the management of their funds.

You will have understood, the state digital currency will have a direct impact in your lives, we will just have to see if it will be well controlled, balanced. But wouldn’t it be better to do without it, can we really trust the States not to abuse this new power they will have?