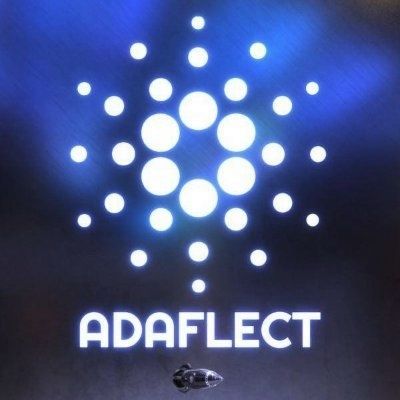 What is ADAFlect? The ADAFlect Token is designed to act as a shareholder token against the overall volume on the ADAFlect Network. Coupled with this, rather than reflecting native tokens, ADAFlect instead reflects back Cardano’s native ADA Token as made available via Binance-Peg.

In reflecting back ADA Tokens, holders instead can trade their profits against Cardano’s massive liquidity pool, without needing to place any sell pressure on the ADAFlect token. Coupled with the parabolic rise of ADA, traders can easily de-risk their initial investments, and hold ADAFlect to allow for passive earnings to continue building based off highly incentivized network activity.

As a final incentive towards overall safety in liquidity, 2% of the shareholder volume is directly placed into ADAFlect/BNB Liquidity, with any returned LP Tokens automatically being sent to the burn address; ensuring a constantly raised liquidity floor.

What is ADAFlect? We have begun to answer this question, but here are some more details:

By owning ADAFlect, you receive ADA, the native token of Cardano on the basis of every transaction in the network!

Every time someone buys or sells ADAFlect, you will be entitled to a share of their tokens – automatically sent to you directly in ADA, allowing you to use or sell ADA, without having to sell ADAFlect.

With Binance’s ADA-PEG, you can receive ADA directly into your wallet, without the need to download or install native ADA software!

Many alternate-reflection based tokens which provide rewards that differ from the held token have suffered from severe security exploits in the past, which ultimately tanked both their value, and volume within seconds.

The ADAFlect Team worked directly with Paladin Blockchain Security for full auditing, with our token scripts based off of the work of the BabyCake team, and Roger Wu’s Dividend Paying Token.

Comprehensive testing, and a full audit report was made available by Paladin Blockchain Security, with particular attention paid towards safe dividend returns, and ensuring that the native ADAFlect contract could not purchase ADA Tokens at any rate which could negatively impact the given ADAFlect price at the point of purchase.

Coupled with working alongside Paladin Blockchain Security to create the safest possible contract for ADAFlect, the ADAFlect & FLC teams have committed to placing a minimum of 160 BNB (approx. $80,000 USD at the time of writing) into the initial ADAFlect Liquidity Pool in order to mitigate and negate the effects of any attempted frontrunning snipes.

ADAFlect operates with processing all user dividends based off the percentage of ADAFlect tokens which are held, and excludes any invalid reflectionary wallet addresses such as Liquidity Pools (i.e: Pancakeswap), and the Dead/Burn address; ensuring that only legitimate holders are rewarded with ADA Reflections.

The tally of all ADAFlect Dividend shares are calculated with every token trade, which additionally triggers all shared ADA Distributions every hour. This ensures a fully automatic process, allowing holders to receive their ADA Tokens every hour, without any manual interactions needed.

CTHAI token, what is it for?

Belka, what is the goal of this project?