iM Intelligent Mining (iM), what is it?

iM Intelligent Mining proposes a network of solar powered mining rigs to mine Bitcoin. Other coins may be mined in the future based on consensus voting by token holders. Ownership will be decentralized to better crowdsource funding and to mitigate the risks of large mining pools and other forms of concentrated hashing power. They will be built in the desert for maximum efficiency of the solar systems to avoid further harm to the environment.

iM will purchase proprietary ASIC Miners in bulk to reduce costs and boost rewards for potential token holders. Token holders will receive rewards through the iM token: 12% APR, distributed daily. Rigs will be protected by on-site, live-in security by local contracted security firms. Current and future operations will be governed by consensus voting every quarter.

Voting trength will be determined by a diminished return for the number of tokens staked and increased return for time that the tokens are staked. 60% of mining rewards will be used to buy back the iM token, increasing its value over time. The other 40% of the mining rewards will be allocated to operations, growth, and research and development. Token holders will have the option to stake in the iM dapp and participate in liquidity pools on the Dex exchange(s).

Holders will also have preferred access to newly minted bitcoins before they are sold in the market. The Green Protocol (GR Protocol) an exchange on the iM website, will introduce a second class of tokens: iM+, “green” wrapped Bitcoins (GRB), and any other proof of work blockchain coins hat may be introduced later based on a consensus vote.

Users can stake iM to receive iM+, which is then used to swap GRB or any future GR coins. This gives the iM token more utility and provides a ramp to a new token supply.

For ease of use, In the short term, iM Intelligent Mining will continue expanding with the income made from mining to decentralize blockchain mining and provide it with as much free energy as possible.

Today in Decentralized Finance News, as you’ll understand, we’re talking about a mining solution that can directly affect the entire crypto world. 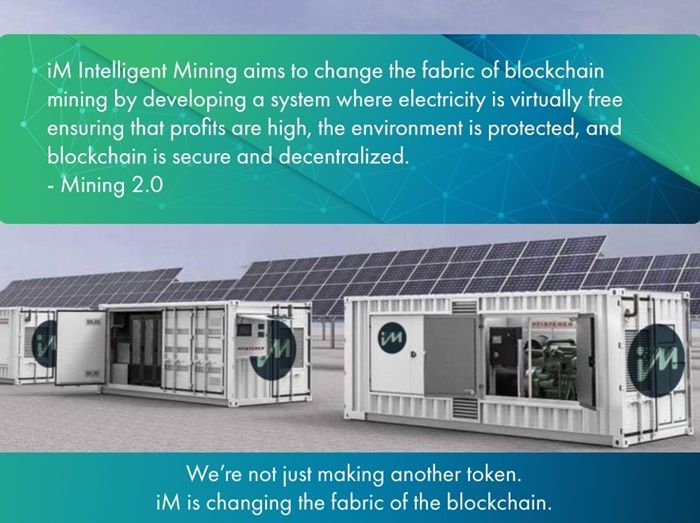 iM Intelligent Mining (iM), what is it and what does it solve?

Like most new technologies, blockchain mining started in earnest without any proper regulations or clear clear objectives in mind. This has resulted in a haphazard deployment of of hashing power around the world. There are there are no standards or limitations beyond the merits of the the blockchain system and the efforts of individuals in software development.

This has led to two major threats threats to the future of blockchain: power consumption and scalability.

The two biggest obstacles to the universal adoption of blockchain technology by the by the public are complicated user experiences user experience and energy consumption fears. These fears are not unfounded. Currently, blockchain mining consumes enough energy globally to be considered a small country in the top 30 energy consumers.

As the sector expands,energy requirements increase exponentially. Leaders in the industry fight to build the most profitable mining operations possible. Because fossil fuels are still the cheapest, most accessible option, these companies tend to turn their focus here. Relying on fossil fuels makes smaller mining operations vulnerable to fluctuations in costs and increases gas fees on transactions. It also makes blockchain mining as a whole dependent on governments, how they handle energy production, and their tolerance of cryptocurrencies.

As blockchains continue to expand, there will come a breaking point where the practicality of using cryptocurrencies will be called into question.

Mining pools were the first conceptual step towards the iM system. Many different users come together to combine their forces for the greater good. However, these pools have come to dominate mining activities. Five companies control over 50% of the total hashing power. One company controls around 18%.

These two factors are creating a dangerous imbalance in mining efforts that could eventually lead to a 51% attack on the various networks.

While this sort of attack wouldn’t destroy a chain, it would greatly lower the public’s confidence in the chain. The purpose of a blockchain is to be impervious to attack, and we are rapidly approaching the point where this seemingly impervious defense is dismantled. The mining industry, which was founded on principles of mass empowerment, has strayed from its roots. It is currently too difficult for individuals to turn a profit while maintaining a sustainable operation.

Building a mining rig has a high barrier of entry: it’s complicated, expensive, and prohibitive to highly mobile individuals or those without access to consistent energy. The blockchain community must end its reliance on fossil fuels and provide universal access to its operations if it wants to scale into the future.

iM will change the fabric of thе сrурtосurrеnсу mining industry, preserving the technology for the future.