AM and SAUBER, the tokens of Aston Martin and Alfa Romeo

AM and SAUBER, here is the respective name of each of the tokens of the F1 teams of Aston Martin and Alfa Romeo. 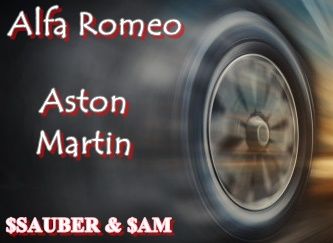 Formula 1 teams Aston Martin and Alfa Romeo have partnered with Chiliz (CHZ) to launch fan tokens aimed at motorsport enthusiasts. The AM and SAUBER tokens will be distributed via the Socios.com platform.

A total of 2 million AM and SAUBER fan tokens will be distributed to those who have pre-ordered tokens on the Socios.com platform.

This partnership will give the fans the opportunity to have a new participation, an innovative relationship with F1 and will also allow to tell the story of these brands in a new and exciting way.

In fact, this is not the first time that the cryptocurrency world has invited itself to Formula 1.

AM and SAUBER, the logical continuation of a love story between F1 and cryptocurrency :

Indeed, this is not the first F1 team to launch this type of token. Indeed, the McLaren team have teamed up with Bitci.com (BITCI) to launch their own fan token. An exchange logo even appears on the racing cars and helmets of Lando Norris and Daniel Ricciardo.

More recently, Red Bull Racing also sealed a partnership with the Tezos blockchain (XTZ). The Tezos logo will appear on Red Bull F1 cars and the team will be releasing non-fungible tokens (NFTs) for their fans in the near future.

Aston Martin Fan Tokens ($ AM) are cryptographic assets (digital currencies) that give their holder the right to vote in surveys published by Aston Martin Cognizant on the Socios.com app.

Sauber Fan tokens ($ SAUBER) are cryptographic assets (digital currencies) that give their holder the right to vote in surveys published by Alfa Romeo Racing on the Socios.com app.