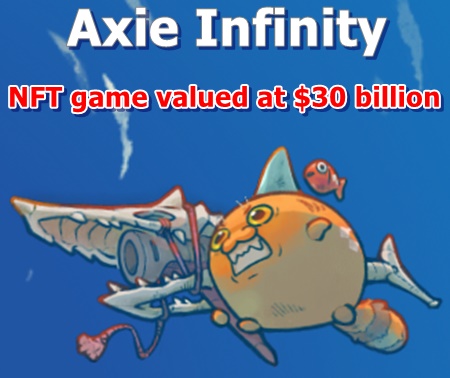 NFT game Axie Infinity, a revolution is underway in the game world, indeed, Axie Infinity’s game is very popular, in fact it is the most popular, but still, who would have said that an NFT game would be so vitally valued at 30 billion dollars, nobody actually.

In the context of NFT news, it should be noted that the achievement of Axie Infinity’s game is quite exceptional, here are the facts:

The hype around this blockchain phenomenon has generated about $28.9 million in weekly revenue. On a yearly scale that’s nearly $1.5 billion in revenue.

Axie Infinity knows how to attract new users to its game thanks to guilds: they allow users to borrow NFT Axies to play the game, with a revenue sharing system.

NFT game Axie Infinity, did you know that there are players who earn their living full time?

When a game becomes the main source of income for its players:

It’s just amazing, but in regions like Southeast Asia, especially the Philippines and Vietnam, this one is fueling a digital economy based on crypto assets.

In these regions where banking services are difficult to access and often expensive, Axie Infinity has become one of their main sources of income for its players.

As a reminder, in its premise, the game allows users to purchase characters, the “Axies”, as NFTs. Once we have three, we can play on the game platform, online or against an AI system, and earn revenue in cryptocurrencies.

The buzz around this blockchain phenomenon has generated about $28.9 million in weekly revenue. On a yearly basis, that’s nearly $1.5 billion in revenue.

We can also see that the number of players is constantly increasing. One of the main reasons, despite the increase in the price of AXS tokens and Axies, could be the rise in power of guilds. Guilds allow users to borrow NFT Axies to play the game, with a revenue sharing system. This considerably lowers the price to pay to enter the Axie Infinity universe.

With this process, users can play games such as Axie without spending large amounts of money up front, and at the same time support the guilds that offer them the opportunity to play the game.