Euler, everything you shouldn’t ignore about this project. Discover its ecosystem, the proposed solutions and direct access to its official website.

Euler is a non-depository protocol on Ethereum that allows users to lend and borrow almost any crypto asset. 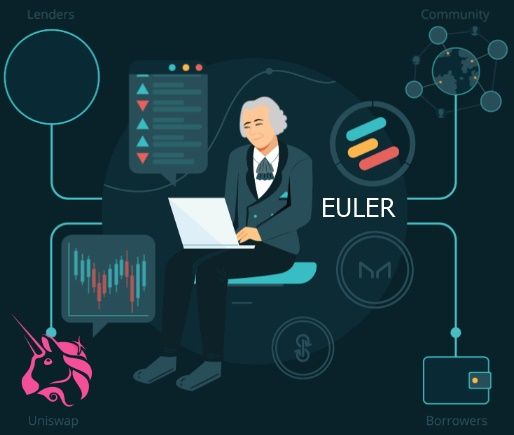 This project comprises a set of smart contracts deployed on the Ethereum blockchain, which can be freely accessed by anyone with an Internet connection.

Euler is managed by the holders of a native protocol governance token called the Euler Governance Token (EUL).

The protocol is entirely non-custodial; users are responsible for managing their own funds.

As creators of the protocol, Euler’s development team has produced a convenient, user-friendly front end for its smart contracts. However, users are free to access the protocol in any format they wish, and everyone is encouraged to create their own front-end access points to the protocol to help decentralize access and increase resistance to censorship.

When lenders deposit into a liquidity pool on Euler, they receive interest-bearing ERC20 eTokens in return, which can be redeemed for their share of the underlying assets in the pool at any time, as long as there are unborrowed tokens in the pool (similar to Compound’s cTokens). Borrowers take liquidity out of a pool and return it with interest. Thus, the total assets in the pool grows through time. In this way, lenders earn interest on the assets they supply, because their eTokens can be redeemed for an increasing amount of the underlying asset over time.

The user interface includes a convenient tool to help users batch up multiple transactions and reduce their gas costs, which we call a transaction builder. Advanced users can use this feature in conjunction with a ‘defer liquidity checks’ option provided on the protocol to rebalance loans or perform flash loans.

The protocol will be managed by holders of a native protocol governance token called the Euler Governance Token (EUL).

EUL tokens will represent the voting rights of the protocol software. Holders with enough EUL tokens will be able to make a formal proposal for a change to the protocol. They can then vote on the proposal themselves or delegate their voting shares to a third party.

Examples of decisions that token holders could vote on include the proposed changes:

In short, Euler makes it possible to democratize the assets that people can lend and borrow.

ByBrix, turn your bitcoin into bricks and mortar.